Even though most programming is now carried out in high level languages, a good understanding of the generated assembly code really helps in debugging, performance analysis and performance tuning.

Here we present a series of articles describing C to assembly translation. We will be mapping C code to pseudo-assembly. The concepts learnt here can easily be applied to understand the generated code for any real processor assembler.

In this article, we will discuss the assembly code generated for function calling, parameter passing and local variable management. Before we go any further we need to discuss a few things about the pseudo-assembler.

The following block shows the C code and the corresponding generated assembly code.

The generated assembly code is shown along with the corresponding C code.

The generated assembly code is best understood by tracing through the invocation of CalledFunction() from CallingFunction().

Setup the frame pointer and allocate space for local variables

CalledFunction() sets up the stack after invocation. This involves allocating space for local variables and setting up the frame pointer:

Before the function returns, the stack setup at the start of the function has to be undone. This is accomplished by the following steps:

Return back to the caller

The processor now executes the RETURN_FROM_SUBROUTINE instruction. This instruction pops the return address from the stack and transfers control to the CallingFunction() at this address.

The CallingFunction() now pops the parameters that were passed to the CalledFunction(). This is done by adding 8 to the stack pointer.

We have covered the C calling convention, frame pointers and the assembly code in the previous article. This article will focus on the code generation for:

Code generation for a "while" loop

The following example shows the code generation for a simple while loop. Also note that the function shown below does not use a frame pointer as this function does not have local variables. Since the FRAME_POINTER register is not used, parameter access is carried out by directly taking offsets from the STACK_POINTER register.

Code generation for a while loop

Code generation for a "for" loop

Code generation for the for loop is covered in the example given below.

Code generation for a for loop

The code generation for C structure access is covered here. The example shows the filling of a message structure. This function does not have LINK and UNLK as the local variable p_msg has been assigned to a register, so no space needs to be allocated for local variables on the stack.

The code below shows an instance of array indexing. The generated code is very inefficient because it leads to a multiply by structure size. This overhead can also be reduced by making the size of the structure a power of 2, i.e. 2, 4, 8, 16 etc. In such cases the compiler would replace the multiply with a shift instruction.

Most compilers will optimize the above code by directly incrementing the pointer in a loop. The optimized code and the generated assembly code are shown below. This optimization really speeds up array indexing in a loop as multiply/shifts are avoided.

C to assembly: if and switch statements

The code generated for a switch statement varies a lot from one compiler to another. In fact, a given compiler might generate different code in different scenarios. The choice of the code to be generated depends upon the number and range spread of individual case statements.

Different cases of generation of a switch statement are: 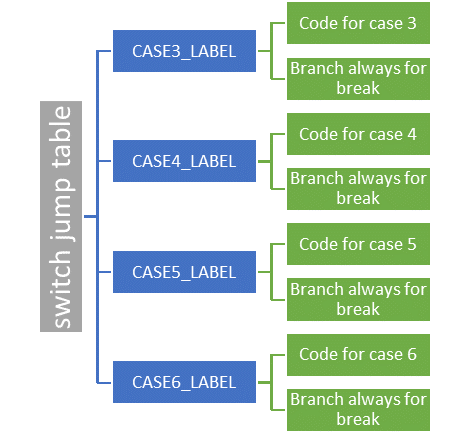 Generation for switch statement (case values are in a wide range)

If the switch statement has a very large number of case legs and the values are widely distributed, some compilers use binary search to select the case leg. The different case values are sorted by the compiler at compile time for a binary search.